A text report from John Puffer about the race:

Very hard from the gun.  The field, probably, finished with 1/3 of the starters.  A break of about 8 went 2/3rd of the way through the race with RJ in it.  Chad (Burdzilauskas) got in a chase group 20 seconds back with 4 riders.  RJ won the sprint out of his (lead) group.  Chad won the sprint out of his group.  (John) Grant 3rd in the field sprint.  Really good results on a hard course.  121 starters.”

Thanks for the report John!!

From http://www.tourofamericasdairyland.com/ about the race…

“In the Men’s Pro Race, rain started to fall from the gun, making for less than ideal brake-squeaking conditions. Ninety-six riders at the Start Line, just 46 finished, most opting instead early on to watch the race safely from the barricades.

Roughly 30 minutes, a legit break of Alexander “ARay” Ray (ISCorp-Intelligentsia), Colton Barrett (Texas Roadhouse) and yellow jersey Ricardo Escuela (Predator-Carbon Repair) formed. ISCorp’s Aray drove the pace early on but ARay and Barrett (Texas Roadhouse) shared the brunt of the heavy lifting throughout the race. As the gap continued to build to nearly 45 seconds, the break was just 15 seconds out from lapping the field at one point.

Barrett’s attack with 25 to go was short-lived. Even with Escuela’s (Predator) fall into turn two at 18 to go, ARay and Barrett couldn’t manage to shake Escuela during the race, as he jumped right back in to rest third wheel.

A break of six started to splinter from the field with 13 to go, and Ricardo Van der Velde (Jelly Belly) continued to lead that charge after picking up a prime but with a 31-second gap at six to go, Barrett (Texas Roadhouse) attacked again, overpowering ARay (ISCorp) and Escuela (Predator). ARay (ISCorp) and Escuela (Predator) duking it out with the field screaming behind, it was Escuela in second; ARay third. Escuela stays in the yellow Overall Leaders Jersey for another day, 27 points ahead of ARay.

Tour of America’s Dairyland continues Saturday for the penultimate day of racing at the ISCorp Downer Classic presented by Intelligentsia Coffee. If the rain clouds get distracted, tens of thousands of spectators are expected for this fast course, maxed field, heavy prime day. Last year, over $6,000 was given away to one Pro rider during the Ben’s Cycle Ultra Prime lap. Outside of the Pro races, several omnium competitions are still up for grabs as category Overall Leaders jerseys have yet to be decided. The Intelligentsia-WCJ Pilgrim Wire Juniors Cup, part of the USA Cycling Road Devo Series, also continues at the ISCorp Downer Classic.

Nick Ramirez checks in about his win today… “Won the Illinois state championship road race. Lots of good riders. Broke away at mile 6, three riders Bridged, we dropped one. Three stayed off the front the rest of the race. Last climb a rider attacked I got on his wheel. Took the sprint for the sSate Champions jersey! Go roadhouse. Another 4 hours OTF today. 90 miles of Hot hot heat!” 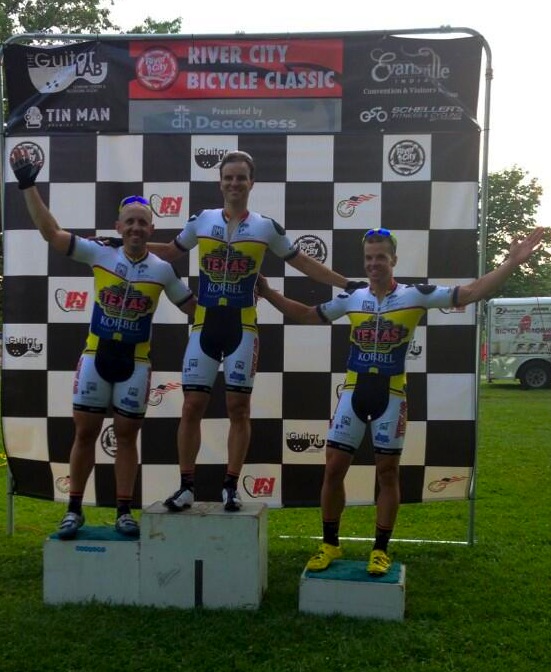 In a quick text,

“I was 10th last night in the first stage of the Tour of Galena. It was a hell bender, hilly circut race with 2 climbs over 15% grade. I was 6th this morn in the TT. Currently sitting 9th overall. The road race is at 3:30pm and is an extremely hilly 90 miles.”

Good luck to Nick in the Road Race today and Crit tomorrow. If you are around Galena, IL, stop by and wish Nick well.