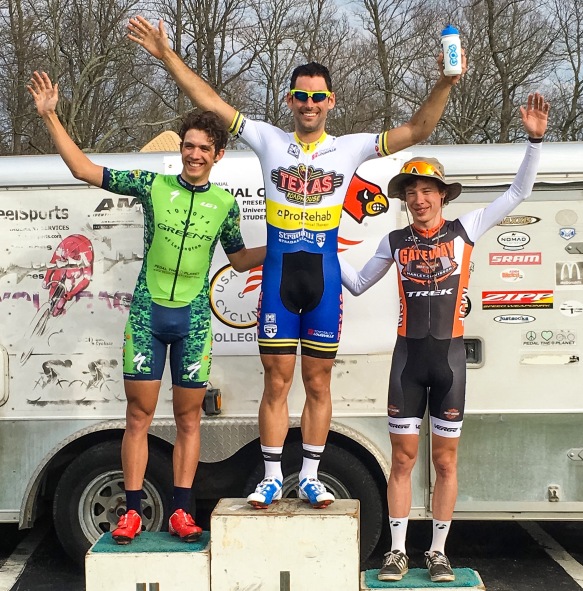 CHICAGO, IL. (USA) In what is the best way to start the 2016 season the heavily favored Texas Roadhouse Cycling Team pulled off a photo finish sprint win at the First Annual Cardinal Criterium at Long Run Park in Louisville, KY. After rain showers passed through the Louisville, KY area mid-day Saturday, March 13th it quickly became the hottest day of 2016. With the sun out and temps reaching 73º a hot and hard fight began at the sound of the start gun. But with a large contingent of Texas Roadhouse riders in the field many thought controlling the field would be the key to victory. The question was who, on the team, would be the one to contend for the number one spot. In the end, it was new team member Brice Brookshire (25), Indianapolis, IN who took advantage of a two-man breakaway late in the race to sprint for the win. However, It was not easy for Brice. When he started his sprint the chain jumped a ring in the front. Brice quickly recovered and dug deep for every watt he could muster. The final pedal strokes to the uphill drag race finish proved to be just what the second year med school students needed to take the win by a whisker. And with that, the season is underway!

The first race of the cycling road season is in the books for the Texas Roadhouse Cycling Team. The traditional kick-off to the season, Long Run Park in Louisville, KY happened today. And Texas Roadhouse came away with the premier Cat 1/2/3 race. Standing on the top step of the podium was Ryan Shean. In the photo is our new mascot Bubba the Water Bottle. Stay tuned for more of adventures from Bubba.

Update: Race report from Ryan Shean: “Our guys and the Bissell-ABD guys went to the front and started sending attacks early. A small group with Colton and 4-5 others went up the road and I bridged up with one other guy. We were almost caught when John Jacobs attacked and I followed him. We eventually caught a guy way up the road and the three of us took the gap out to about a minute. With a lap to go we were about to be caught by a small group with KP and two bissell guys. I let JJ and the other guy in our trio lead me out for the win and KP nearly caught us, picking up 5th.”

Some of the Texas Roadhouse Cycling crew went to Berlin, TN to race the “Hell of the South” event (Saturday March 29th, 2014). Rain was all around, but that did not deter our crew from putting in big efforts. In the Masters 50+ race, Louisville, KY resident, Curtis Tolson took the top Rock!  As for the Elite Team… we will give that report later. Thanks to the promoter and volunteers for making that fun race happen. Rain, Harsh pavement, dirt/gravel section and 78 miles in the Pro/1/2 made it… well… Hell!

Tolson wins the Masters 50+ Hell of the South

The booty from Hell of the South

A text report from John Puffer about the race:

Very hard from the gun.  The field, probably, finished with 1/3 of the starters.  A break of about 8 went 2/3rd of the way through the race with RJ in it.  Chad (Burdzilauskas) got in a chase group 20 seconds back with 4 riders.  RJ won the sprint out of his (lead) group.  Chad won the sprint out of his group.  (John) Grant 3rd in the field sprint.  Really good results on a hard course.  121 starters.”

Thanks for the report John!! 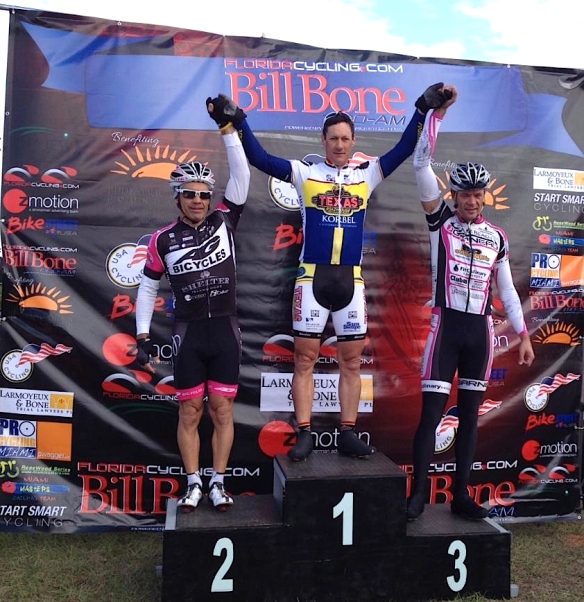 Curtis Tolson stand atop the podium after winning the race.