Daniel Holloway beefs up the roster for Texas Roadhouse Cycling! 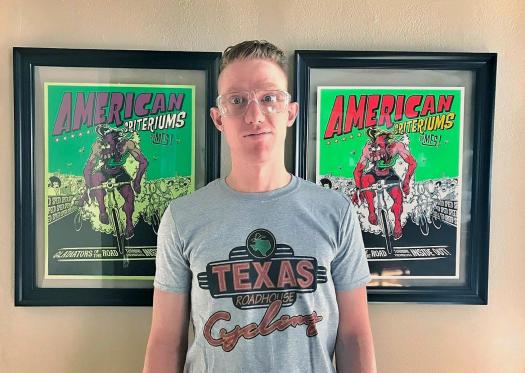 Texas Roadhouse Cycling is proud to announce the signing of 5-time National Criterium and current Elite Road andCriterium Champion Daniel “Hollywood” Holloway. Daniel adds serious firepower to a roster that is already filled with young and talented riders. “2017 is going to be an exciting year full of new opportunities to learn and teach the young guys on the squad. It was very motivating to talk with the Texas Roadhouse family to set things up for 2017. We couldn’t have agreed more on the approach for the upcoming season and I look forward to all the fun and action,” said Holloway.

Joining Daniel and new to the team for 2017 are Marco Aledia, Australian Jake Magee and Doug Fagan. The team will also return all members of the 2016 National Champion Elite Team Pursuit squad of Zach Carlson, Ryan Shean, Kyle Perry and Jordan Marhanka, as well as Matt Salpierto and Brice Brookshire.

“I have known Marco since I was 17 or 18, so staying with him in 2017 is very comforting. He has been a key to my success on and off the bike and always there to steer me in a good direction. His tactical awareness and ability to adjust a race in the team’s favor will be crucial for 2017. Bringing Jake Magee along for the ride is exciting as well. He was a player in just about every race- even when he was solo and had a very impressive 2016! It’s also great to have a bit of Aussie flavor for 2017! And the thing I am most excited about is working with the young talent already on the team. They showed their ability last year and I hope to help elevate and get them results of their own. There is some untapped talent here and I hope to bring that out.” – Holloway speaking about the 2017 roster.

Check out the team on social media:

From Jordan: “Another awesome race today! I can’t thank my team@bricebrookshire @rshean7 @mrkyleperry and @whoismattsal for all the help these past two days, I couldn’t have done it without them. I ended up winning the road race today and taking the win in the overall Omnium! I’m excited for elite nationals and pretty happy with my form. #letsdothis ”

File Transfer: IMG_8667.jpegPodium at the Indy Omnium Crit Sunday in Carmel, took the win after a hefty lead out from Alex and secured the omnium victory for the weekend!

Congratulation to a few of our team riders who moonlight for Marian University… Zach Carlson, Brice Brookshire and Jos Chalmers. They raced the Lindsey Wilson Collegiate over the weekend with great success.
Crit – Jos and Jordan active in the early moves to set up the winning move w/ Zach and Brice in the mix. Zach wins with a flyer from over 1k out (video), Brice slides in at 4th. Jos controls the last 3 laps in the field to set up Jordan for the field sprint win.
TTT – Jos, Brice, Zach and FIB rider Ben Shmutte win by over 30 seconds over Marian’s second team, over a minute faster than 3rd place. 28~ mph Avg on a rolling hilly course.
Road Race – strong 6th place finish from Zach in a tough hilltop sprint.

CHICAGO, IL. (USA) In what is the best way to start the 2016 season the heavily favored Texas Roadhouse Cycling Team pulled off a photo finish sprint win at the First Annual Cardinal Criterium at Long Run Park in Louisville, KY. After rain showers passed through the Louisville, KY area mid-day Saturday, March 13th it quickly became the hottest day of 2016. With the sun out and temps reaching 73º a hot and hard fight began at the sound of the start gun. But with a large contingent of Texas Roadhouse riders in the field many thought controlling the field would be the key to victory. The question was who, on the team, would be the one to contend for the number one spot. In the end, it was new team member Brice Brookshire (25), Indianapolis, IN who took advantage of a two-man breakaway late in the race to sprint for the win. However, It was not easy for Brice. When he started his sprint the chain jumped a ring in the front. Brice quickly recovered and dug deep for every watt he could muster. The final pedal strokes to the uphill drag race finish proved to be just what the second year med school students needed to take the win by a whisker. And with that, the season is underway!

Welcome to 2016! We will be debuting our new Santini kit at the: